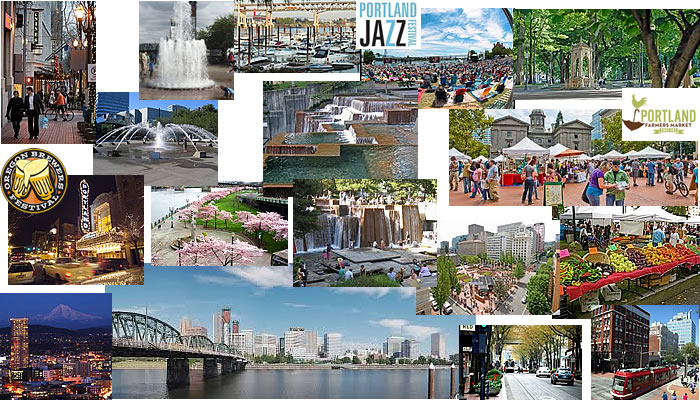 A photo portrayal of downtown Portland

Downtown Portland in the West Portland neighborhoods has so much to offer from its world class restaurants to its farmers markets and festivals.  Downtown is found in the SW Part of

the inner west side of the city, including everything from  from the Willamette to Interstate 405, and south from Burnside Street to just south of the 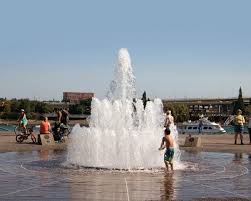 Portland State University campus.  North of Burnside is the Pearl closer to the Willamette, and the Alphabet District west of about 14th.  This part of downtown is more the cultural district, with the University, museums, art etc.  It is smaller than most cities, but what it has is pretty cool.  There are also lots of fountains all over the downtown SW and NW areas, which is something I love about Portland

The Waterfront area of the Downtown Portland has long green lawns, lush trees, riverside paths and fountains that offer a haven for active people and happy pets. There are also summer festivals most weekends, including the century-old Rose Festival (May-June) and the legendary Oregon Brewers Festival (July).   We used to have a motor boat and we would put our boat into the water at Willamette Park, and head towards Portland for the festivals.  You could either stay out in the water and listen to music, or pull up to the dock, tie up and wander around the festivals.   Below shows the Blues Festival with all the boats out in the water, and people on the grass listening to music.

The Tom McCall Waterfront Park has a huge fountain is right above the water.  My earliest memories of Portland with my kids when they were little, was riding our bikes along the waterfront from John’s Landing, past the Old Spagetti Factory and through the big fountain at Waterfront Park on a hot day!  Kids love to run through it when it is hot, and it is a great gathering place.

Director Park, located just a block from Pioneer Courthouse Square, is a former parking lot that was converted into a public square in 2009. The park features a café, ample outdoor seating and a fountain, and plays host to occasional events in the summer. It’s also right next to the Alder food cart pod.

graphic arts.  They have different exhibitions that come in and out all year.  You can check and see what is on exhibition now

The South Park Blocks are part of the Cultural District and you’ll find the Oregon History Museum, with its extensive collection of artifacts and exhibits tracing the region’s history back to its first inhabitants.

The Arlene Schnitzer Concert Hall is crowned by the Iconic 65-foot-high “Portland” sign illuminated with 6,000 lights. The “Schniz” is home to the Oregon Symphony.

Eden and WendyI at the Newmark Theatre.

The Newmark Theatre is one of our favorites because it has the Oregon Children’s Theatre.

The Keller Auditorium is the home stage for the Oregon Ballet Theatre and the Broadway Across America series.  We’ve seen

ballet, Annie, Charlottes Webb and other productions there. I’m always amazed by the huge beautiful fountain outside that our kids loved to climb.

There are 3 different Farmers Markets in Downtown Portland. Saturdays, Mondays and Wednesdays at PSU, Pioneer Square and Shemanski Park. They have more than 200 vendors with deep roots in Oregon and Southwest Washington, including farms, nurseries, bakeries, meat and seafood providers, cheese makers and specialty food producers.

Looking for a walk score of 99? Don’t want to ever have to deal with rush hour again? Live in one of the condos downtown in the heart of the city, either in the SW section, or the NW section.  The southwest is more the cultural district, with big office buildings, theater, art museum etc.  The NW section contains the Alphabet District with all its beautiful historic buildings that have been converted into condos, and the NW 23rd and the Pearl.  The city has so much to offer.

Here are some of the condos found in the SW area.  You can see the ones in NW if you go to the Pearl and the Alphabet District.

University Park Condominiums were apartments built in 1987, on Park St, that were converted into 125 apartments ranging from studio to 2 bedrooms.  They are cheaper than alot of the condos in downtown, especially if you want a 1 or 2 bedroom.

Harrison West is on 2nd and Harrison- Has panoramic views of the city and mountains!  It is a huge 20 story high rise, so it is a different kind of living.  It was converted to condos in 2006.  This is also a good place to look if you want a 2 bedroom.

The Portland Plaza on SW 5th Ave. Iconic building has rounded windows- built in the 1970s. Complete remodel will be done in 2018 for Lobby, Library, community room and Terrace with Pool and BBQ pit.